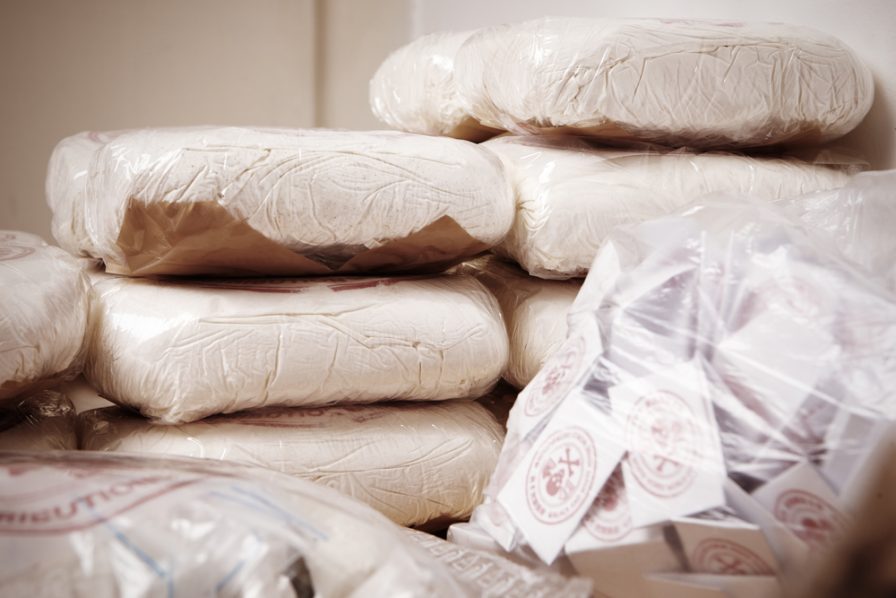 Sean has been using cocaine as a recreational drug for several months but decides to buy an ounce of the substance since the price is good. After buying the drug, he places the packages in the trunk of his car and begins to drive home. On the way he decides to snort a few lines, so he pulls over into a 7-11 parking lot, opens up a small baggie, and begins snorting. A police officer sees Sean bending over and touching his nose, becomes suspicious, and decides to approach his car. Sean sees the approaching officer and puts the baggie in his pocket. The officer asks Sean if he is snorting a drug. Sean denies it but the officer asks Sean to exit his car and then searches it, eventually finding the packages of cocaine in the trunk. Sean is arrested for distribution of cocaine because of the large quantity found. What does Sean need to know about the charges against him?

Cocaine is a Schedule II narcotic, meaning that it has some medical value but poses a high potential for abuse that could lead to severe psychological or physical dependency. Possible sentences if convicted of cocaine distribution depend on such factors as whether you are a first-time offender, if you were engaged in distribution of the drug, or in trafficking.

Penalties for Cocaine Possession and Distribution

If convicted of possession only, you face the following penalties:

If convicted of possession with intent to distribute cocaine, you face:

Trafficking is the most serious drug offense. It applies if you are arrested and charged with possessing at least 18 grams of the drug, which is one ounce. Depending on the quantity, you face the following:

Defenses to Distribution of Cocaine

There are defenses available to anyone arrested and charged with intent to distribute cocaine.

Lack of Intent to Distribute

If the quantity of cocaine found in your possession or under your control is less than 18 grams, you will not be charged with intent to distribute unless you were caught while engaged in a transaction. In this case, the quantity is irrelevant.

Your criminal lawyer can also present evidence that the drug was for your own personal use so as to negate an intent to distribute. If police do not find or seize paraphernalia commonly used by drug dealers to distribute such as scales, other measuring devices, baggies or packages of small quantities of the drug, and there is no surveillance of a constant stream of persons visiting your residence for short periods of time, then you can argue lack of intent to distribute. Your lawyer may in some cases introduce expert testimony that the quantity of drugs in your possession that constitutes distribution was for your own personal use given your addiction to the drug and capacity for ingesting it.

Under the 4th Amendment to the U.S. Constitution and state law, you are protected from unlawful searches and seizures by the police. Police must obtain a warrant based upon probable cause that a crime has been committed and that you were likely the one who committed it before searching your house or car, though there are numerous exceptions to the warrant requirement. However, if your arrest and charge is based on a warrantless search, your attorney will examine the circumstances to see if any of the court-recognized exceptions apply. These include:

There are cases where a roommate or car passenger had no knowledge that the defendant was dealing in drugs. If you can show that you lacked access to an area controlled by your roommate or that you were merely an innocent passenger in the car stopped by the police, then prosecutors may lack sufficient evidence to convict you.

Tainted Lab Test or Break in Chain of Custody

Also, the drug must tested to show that it was cocaine. Test results may show that it was merely a harmless powder or that at least some of the quantity found was not cocaine or any other illicit substance so that you may not be charged with either trafficking or intent to distribute. In some cases, the drugs are lost or destroyed, or the test was flawed and/or the results falsified. Further, lab technicians and officers storing the drug have to demonstrate an unbroken chain of custody where the tested or stored drugs were received, labeled, tested, and stored. If misidentified or mislabeled or there is lack of documentation of the drug’s receipt, identification, analysis, or storage, a court could suppress its use at trial.

Because intent to distribute cocaine carries serious and substantial penalties, you will need the services of a respected and seasoned criminal lawyer who will explore all available defenses and seek the best possible disposition of your case. Call Paul Moraski at (978) 397-0011 to schedule an appointment to discuss your criminal matter.