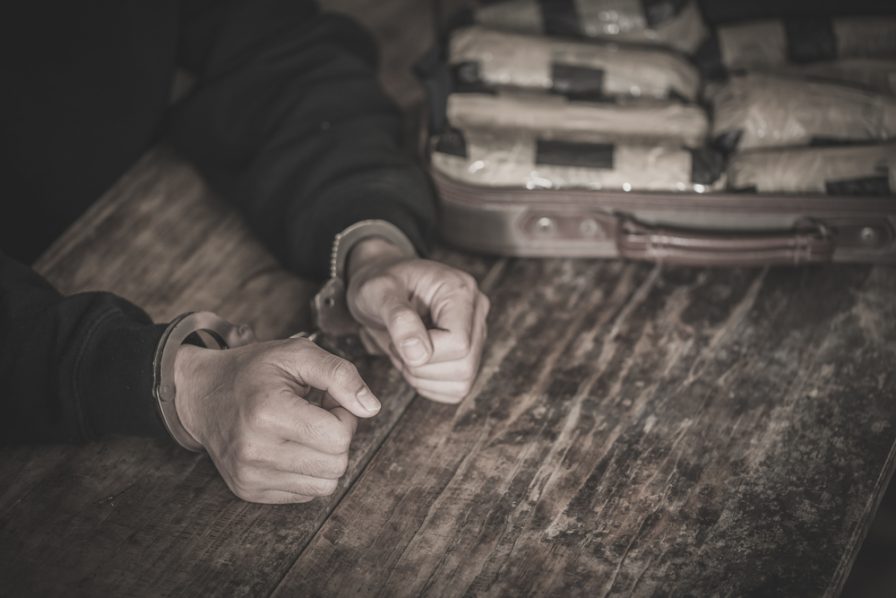 Dave has been dealing drugs out of his house for several months. Police recently arrested Matt, a customer of Dave’s, who was found with heroin on him. Although Dave has prior drug convictions and faces a long mandatory prison sentence, prosecutors promise to not charge him if he tells them from whom he bought the drug. Dave is implicated and police stake out his home, noticing a constant flow of people entering Dave’s house and leaving after only a few minutes. Police obtain a search warrant and arrive at Dave’s house where a search turns up packaged baggies of heroin, scales, and large amounts of loose cash in bundles. Dave is arrested and charged with possession of heroin with intent to distribute. Dave retains an experienced criminal lawyer who advises Dave on what he is facing and his legal options.

Heroin is a Schedule I drug, meaning that it is has no medical value and poses a very high risk of abuse resulting in psychological and physical dependence. Thousands of heroin users succumb to overdoses or tainted substances each year. For these reasons, state and federal authorities treat defendants convicted of distribution with severe penalties.

What Constitutes Intent to Distribute?

The most obvious evidence of intent to distribute is the transaction itself. Once you either give or sell any quantity of the drug to someone, you are distributing it in violation of Massachusetts General Laws, Chapter 94C, Section 32.

In many cases, though, intent is derived from circumstantial evidence. Like the scenario above, police who suspect drug dealing will stake out a residence to observe if there is a steady flow of visitors to the home who only stay for short periods of time. An informant or witness, like Dave’s customer, Matt, who was facing a mandatory prison sentence unless he cooperated with police, may give the name of the person from whom they purchased the drug that can lead to police surveillance of the residence so that they can justify probable cause to obtain a search warrant for Dave’s residence.

Circumstantial but firm evidence of intent is usually found in the tools or paraphernalia used by drug dealers to get their product out. This includes measuring devices such as scales, packaging including baggies that are filled with small amounts of the drug, large amounts of cash that are usually in small denominations, and large quantities of the drug that is more than is reasonable for personal use.

In Massachusetts, heroin is classified as a Class A substance. If convicted of intent to distribute, you face the following possible sentences:

Subsequent convictions result in a mandatory minimum state prison time of 3.5 years and up to 15-years in prison with a $15,000 fine.

Although most drug offenders are prosecuted in state court, you could be subject to federal penalties if your offense was committed across state lines. An example of a potential federal sentence is:

Sentences in state and federal proceedings are enhanced if the drug was being distributed to a minor (under the age of 18), if a firearm was involved, death or serious bodily injury resulted, or if the defendant had prior convictions.

Penalties for trafficking in heroin in Massachusetts are:

Defenses to Intent to Distribute

There are defenses to intent to distribute that can either result in dismissal of all charges or at least reduced to a possession charge where your criminal lawyer might be able to negotiate a no-jail time sentence or even a continuance without a finding. If charged with trafficking, getting it reduced to an intent to distribute is certainly preferable to facing up to 20-years in prison.

Defenses to a charge of heroin distribution may include:

Many drug charges are based on seizure of drugs and paraphernalia from the defendant’s residence, office, car, or boat. Every person has a 4th Amendment right to privacy in their homes, offices or vehicles, and these areas may not be searched absent probable cause to believe the police will find illegal drugs or other evidence of a crime. Police will generally obtain a search warrant based on information gained from a reliable source that specifically lists the location and places to be searched, the time of the search, and the items to be seized. Police can seize other items if in plain view so long as they are legally in the area delineated in the warrant. Persons not named in the search warrant may be subject to a limited search for weapons only if police possess a “reasonable suspicion” that that person is involved in criminal activity.

Challenges to a search warrant are common, especially if police find drugs or contraband in areas outside or beyond the scope of the warrant. In some cases, police may have lied under oath regarding probable cause or about the reliability of an informant. In some cases, a lawyer is able to show bias or previous misconduct by the police officer who obtained the warrant in a motion to suppress evidence.

There are exceptions to the warrant requirement that include:

Police are fully aware that they must advise a defendant of his right to remain silent and to have a lawyer present during questioning, among other rights. This right, however, only applies when the defendant is asked to give a statement or to discuss the alleged crime. Also, police or detectives must stop questioning the defendant as soon as he asserts his right to remain silent or to have an attorney present. There are cases where police have denied a defendant food, water, or sleep or made certain threats or promises to induce the defendant to “voluntarily” make a statement.

Prosecutors must prove that the defendant was aware of the presence of the drugs and was in possession of them before drug charges can withstand a motion to suppress. A passenger in a vehicle that is transporting large quantities of heroin can argue that he had no knowledge of the drug’s presence. If prosecutors have no evidence other than the defendant being in the same vehicle as the driver, charges may be dismissed. The driver might also allege that he was merely transporting packaged items at the request of a friend. To escape prosecution, though, the defendant will usually have to identify the “friend.”

In other circumstances, a defendant who lacked access to certain areas of the house or apartment can allege lack of knowledge of his roommate’s drug dealing, and force the prosecutor to prove the defendant was involved in the crime at all. If it is just as likely that the defendant lacked knowledge of the presence of the drug, then there is reasonable doubt.

Possession of drugs is an element of the crime that can be demonstrated by the defendant having control of the substance or the area or place where it was found. Courts have found defendants in constructive possession where they had knowledge of the drug’s presence on property they owned or had dominion over. This includes a locker where you have the key, a property that you rent, your car where only you drive it, or a common area that you had access to such as dresser that you share where the drugs were found.

Challenge to Lab Test or Chain of Custody

A drug lab must present evidence that the seized drug is heroin or some other illegal substance. Some labs have been shown to be fraught with errors in testing procedures or the drugs were lost or inadvertently destroyed. Also, the technician who was in charge of the drugs in the lab or where it was stored must show a chain of custody, which is the chronological documentation of the collection, transfer, receipt, analysis, labeling, storage, and disposal of the sample tested. If there is break in the chain or lack of documentation, a court can suppress that evidence.

Your best opportunity for a satisfactory resolution of your criminal matter is to promptly contact criminal lawyer Paul Moraski at (978) 397-0011. Favorable evidence in your case can be lost if you delay. Call us today and schedule a consultation to discuss your legal options.