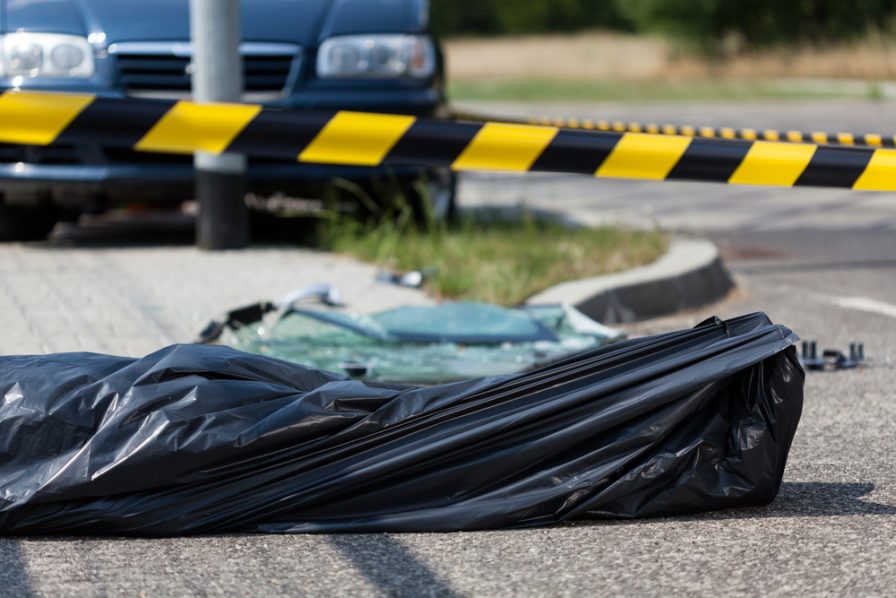 After a few drinks at a bar near his office, Dave gets into his car for the short ride home. He gets on the rural two-lane roadway to his house when he gets a text from his wife who wants him to stop to get some groceries for dinner. Dave texts back and takes his eyes off the road momentarily. When he looks up, there is a deer crossing in front of him. Dave is unable to stop in time, so he veers sharply to his left and into oncoming traffic. His car collides head-on with another car. When Dave regains consciousness at the scene, he sees police vehicles and fire engines with lights blinking and then notices blankets pulled over figures on stretchers and realizes what has happened. A police office approaches Dave who is being attended by an EMT and looks him in the eye before asking him if he has been drinking.

Vehicle homicide is a relatively new offense that was legislated to address motorists who drive negligently or recklessly or while under the influence and cause fatal traffic accidents. Under Massachusetts General Laws Chapter 90, Section 24G, this offense can be charged as either a felony or misdemeanor depending on the facts and circumstances involved. In the above example, a prosecutor could choose to charge Dave with vehicle homicide as either a felony or misdemeanor.

There are 5 elements to the crime of vehicle homicide as a felony. To convict a driver, the state or prosecution must prove each of the following elements beyond a reasonable doubt:

To be convicted of this offense as a felony, the state must prove that you were under the influence and that you drove recklessly or at least negligently in a manner that endangered others. A felony conviction under this statute carries a mandatory minimum jail sentence of one year and up to 15-years in prison.

The mere fact that you were under the influence is not necessarily determinative in finding you guilty of felony vehicle homicide. If your blood alcohol concentration level (BAC) is at least 0.08%, which is a legal presumption that you were under the influence, there are numerous ways that your experienced criminal lawyer can challenge the test result so that a jury could reject the charge that you were DUI. However, you can also be found DUI even if your BAC is under 0.08% or you refused chemical testing based on other evidence such as your overall demeanor that includes slurred speech, the odor of alcohol on your breath, bloodshot eyes, and your having confessed to having had “a couple of beers” coupled with your driving conduct such as weaving, failing to brake, falling asleep, or driving the wrong way on a one-way street.

In this example, though, Dave suffered a concussion in the accident and his slow and confused behavior and speech could be attributed to that fact. Further, Dave can claim he was driving cautiously until a deer suddenly appeared in the roadway, causing him to take drastic but reasonable action. Police, though, may have confiscated his cell phone and found text messages on it at the very moment of the accident that may suggest reckless conduct.

Dave’s lawyer can argue that regardless of the text messages, the sudden appearance of the deer was a superseding or intervening event that led to the fatal crash so that his conduct in veering into the opposite lane was unavoidable, and was not a direct or substantial cause of the accident. If so, then the state may not have met its burden of proving all elements of the offense.

It is a question for a jury or finder-of-fact regarding these issues in Dave’s prosecution:

Under other circumstances, there can be other causes of an accident. For example, another involved driver may have been speeding, or violated some other traffic law, or another motorist failed to stop for a traffic light that caused the defendant driver who may have legally intoxicated to swerve and collide with a pedestrian or other vehicle that led to fatal injuries. In these instances, the intoxicated driver may only face DUI charges since he did nothing that directly set into motion a chain of events that led to the fatal accident. Under a best-case scenario, a successful challenge to the DUI and the failure of the state to prove all elements of the vehicle homicide offense can lead to an acquittal of all charges.

There are 4 elements to the crime of vehicle homicide as a misdemeanor:

4. The conduct or acts of the defendant directly and substantially caused the death of another person

A misdemeanor conviction carries up to 2.5 years in jail.

Prosecutors can charge a motorist with misdemeanor vehicle homicide even if the individual had not been drinking but his conduct nonetheless was negligent or sufficiently egregious to have directly led to the accident. A driver who was texting and driving without being under the influence would likely be charged with a misdemeanor absent other aggravating circumstances.

In Dave’s case, the prosecution may not be so confident in proving that Dave was under the influence and choose to charge him with vehicle homicide as a misdemeanor. If they do, his lawyer may challenge evidence of intoxication or argue in the alternative that even if Dave was under the influence, his conduct amounted to inattentiveness rather than recklessness, that any alcohol he drank was inconsequential to the accident, and that the accident would not have occurred but for the sudden appearance of the deer. Reckless conduct may be consistent with more egregious acts such as excessive speed, driving on the wrong side of the roadway, fleeing a police vehicle, or driving with a BAC twice the legal limit such as 0.16% or higher. Again, it is up to the jury to decide if texting and driving in this case amounted to reckless conduct or negligence which endangered the safety of others on the roadway.

Vehicle homicide is a serious offense that can result in substantial prison time. Paul Moraski is a highly experienced and knowledgeable criminal lawyer who will vigorously defend you against any felony or misdemeanor charges in these and for any other criminal charges facing you. Call him today at (978) 397-0011 for an in-depth consultation about your criminal matter.