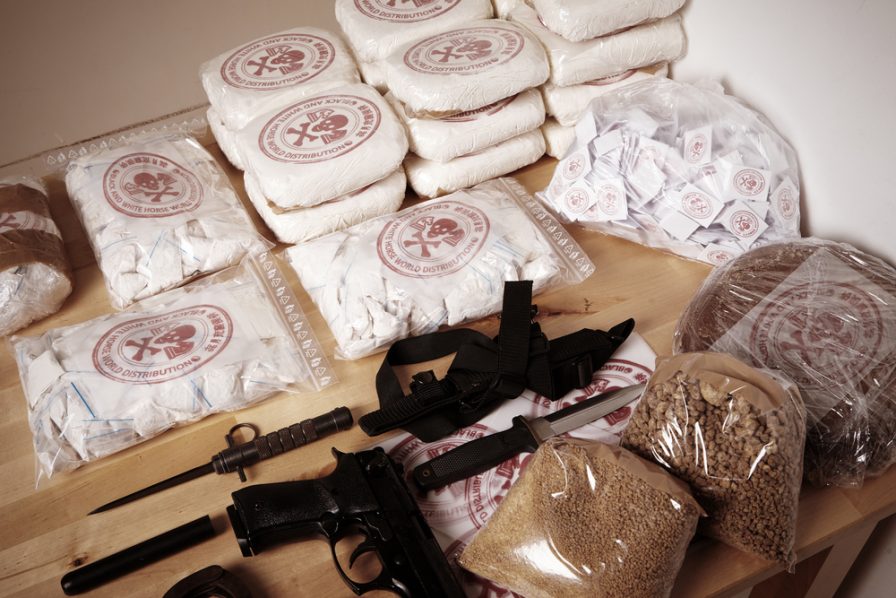 Jose has an arrest warrant out for him for an domestic violence charge. Police spot him coming out of a restaurant and follow him to his house where he is arrested. While in the house, police decide to conduct a thorough search thinking that he might have weapons stashed. During a search of his basement, they find scales, baggies and large amounts of cash. Eventually, they uncover a large quantity of cocaine in bags and arrest him for intent to distribute. Jose’s criminal lawyer files a motion to dismiss the drug charges.

Possession with intent to distribute is a serious drug crime that can carry mandatory minimum prison sentences and substantial fines depending on the class of drug and its quantity. This offense is found under Massachusetts General Laws, Chapter 94C, Sections 32, et. seq. To prove this crime, prosecutors must show proof beyond a reasonable doubt that a transaction occurred where an illegal drug was given or sold to another person or that there is sufficient circumstantial evidence that meets the standard of proof. The quantity of the substance found is only relevant if it constitutes distribution or trafficking that carries more severe sentences. If you are convicted of selling narcotics to a minor (below the age of 18), though, you also face an enhanced sentence.

If you are charged with possession with intent to distribute, immediately contact criminal lawyer Paul Moraski. Further, do not give any statements to police or implicate others regardless if you are promised a dismissal of charges or leniency in sentencing. There are defenses available in any criminal case that your criminal lawyer can explain to you and discuss how they may apply to the facts and circumstances of your case.

You should also be aware of the various penalties associated with possession and intent to distribute drugs based on the classification of the drug and if you have prior convictions.

These include drugs like heroin or fentanyl, which are especially insidious drugs where an overdose is commonly lethal. Small amounts of fentanyl are particularly lethal. Your sentence if convicted can be:

Subsequent convictions result in a mandatory minimum state prison time of 3.5 years and up to 15-years with a $15,000 fine.

Drugs such as methamphetamine, PCP, LSD, oxycodone, and cocaine are the most common in this class. Sentences are:

These are considered less potent than other classes of drugs and include tranquilizers, mescaline, and psilocybin mushrooms. If convicted, you face:

These include marijuana and phenobarbital. A conviction can result in:

Codeine, morphine or opium are drugs within this class. This is a misdemeanor offense with the following sentence:

Unless you were caught in a transaction involving an illegal substance, usually with an undercover officer, the prosecution must prove beyond a reasonable doubt based on other evidence that you evinced the intent to sell or distribute. Generally, this is shown by officers finding in your possession or home:

However, these items are usually found after a search that can only be undertaken if the police have probable cause to search you or your residence or have obtained a search warrant.

Defenses to Intent to Distribute

Common defenses to possession with intent to distribute are:

Police may have searched a home, office, or vehicle, and seized drugs or paraphernalia commonly used by those engaged in sales or trafficking. Before police can search any residence or office, they must obtain a search warrant that is based on information, usually from an informant or witness, that a particular crime was committed. A search warrant is limited to a particular location and areas, and to items to be seized such as drugs or firearms.

In Jose’s case above, the the search was done without a search warrant. To avoid having the evidence suppressed or deemed inadmissible, the police must justify the intrusion by showing that they had probable cause to do so or can point to an exception to the warrant requirement. These exceptions include finding illegal substances in plain view, seizing items following a limited search after a lawful arrest, if consent is given, and in emergency or exigent situations where evidence will likely be lost unless an immediate search is undertaken.

In the example above, Jose was arrested on a separate charge pursuant to an arrest warrant. Without a search warrant and without exigent circumstances or consent, police searched his house and found drugs, scales, and other paraphernalia used in sales. The seizure of these items could be deemed unlawful since police had no search warrant and had already fulfilled the purpose of the arrest warrant by arresting Jose.

But even if police had secured a search warrant, they may not search beyond the parameters or scope of the warrant. If the warrant only indicated a search of a shed, then an extended search of your parked car on the street or of your house would exceed the scope of the search and any seizure of drugs or paraphernalia at these locations would be unlawful.

Lack of Intent to Sell

If you can demonstrate that you possessed the drug solely for your own personal use, then this would negate any intent to sell or distribute. Even an apparently large quantity of the drug in your possession does not necessarily show intent to sell absent other indicia. Long time users or addicts can often use large quantities of the drug to which they are addicted.

If you have no prior convictions for possession of illegal drugs or other drug experience, then you might argue that you had no knowledge that the drugs in your possession were illegal substances but were a harmless substance such as sugar instead of cocaine. If your roommate was engaged in distribution but you had no access to his room or any other area where the drugs were located and being sold, then the prosecution may have a difficult time proving that you knew of the drug’s presence or had any involvement in the sales.

You best opportunity to obtain a favorable disposition of your case is to retain criminal lawyer Paul Moraski as soon as possible. Call his office today at (978) 397-0011 today for an in-depth consultation about your criminal matter.